In the right hands it was a match for US Navy Vought F4U Corsair and Grumman F6F Hellcat fighters but as was often the case for the Japanese, it was introduced too late (1943) and with only 1,413 produced between 1943-1945 (only 406 of these were the N1K2-J model), it was not built in enough numbers to change the course of the war and the ever approaching Allied bombers. Pproduction delays occurred with development issues and of course Allied bombing of industrial areas limited the availability of airframes, engines and parts.

The George was a unique development of the Kawanishi N1K1 Kyōfū (“Strong wind“, Allied Code Name: Rex) floatplane fighter of the Imperial Japanese Navy which also entered service in 1943 (normally land based fighters were turned into floatplane fighters, not the other way round! 97 were produced between 1942-1944 – 8 prototypes and 89 production aircraft). The Rex was a good aircraft in its class, designed to operate from islands where no suitable air bases could be found to support forward troop movements. It was a good idea when Japan was on the offensive but by 1943 they were slowly retreating and needed to focus on air defence. Obvious speed and handling improvements could be made by removing the floats, modifying the airframe to suit, adding a new  18 cylinder Nakajima NK9H Homare 1,850hp radial engine and new undercarriage and the concept for the land based George was born! The first N1K1-J Shiden prototype flew in 1942  but it wasn’t as easy as just converting the floatplane to a land plane as production was delayed with new engine and undercarriage development issues.

A unique combat edge for the Kawanishi N1K1-J Shiden / N1K2-J Shiden Kai was the special wing flaps with a mercury switch that could operate automatically to provide lift during air combat and increase maneuverability during sharp combat turns – their angle adjusted in response to acceleration. This system was powered by electricity and oil pressure through a U-shaped tube containing mercury! They performed well in combat with US Navy fighters at lower levels over Taiwan (then Formosa), the Philippines, Okinawa and the home islands but a downside in engine performance was its inability to operate suitably at high altitude, above 21,000 feet where the USAAF Boeing B-29 Superfortress bombers could be found. Up at that altitude the engine became unreliable and suffered a distinct loss of horsepower.

The N1K2-Ja Shiden Kai featured an uprated 1,990 hp Nakajima NK9H Homare 21-18 Ja radial engine, a larger propeller and with War Emergency Power (WEP) could reach a top speed of 711 km/h (442 mph) for a brief period of time at high altitude, thus improving bomber interception performance but all too late. It could also carry 4 x 250 kg (551 lb) underwing bombs but given stopping bombers was its main role I am not sure why this was added?

The George was mostly flown in the air defence of the home islands in Japan by the famous 343rd Kokutai (343rd Naval Air Group) and also by the Yokosuka Kokutai, a test and evaluation unit in which the pilots were pressed into defending the airspace of their homeland. The 343rd Kokutai was formed in 1944 and first entered combat in early 1945. The unit was composed of the best remaining Imperial Japanese Navy air aces and pilots who were sensibly tasked with air combat, not Kamikaze attacks and fought on until no aircraft were available – they disbanded when the Emperor ordered a general surrender on August 14th, 1945. The unit was commanded by Captain Minoru Genda (1904-1989) who had helped plan the attack on Pearl Harbour on December 7th, 1941, including the training of air crews to take on this bold strike upon US territory.

343rd Kokutai pilot Warrant Officer Kinsuke Muto showed US Navy pilots what the N1K2-Ja Shiden Kai was capable of in February 1945 when he single-handedly flew into a formation of twelve Grumman F6F Hellcat fighters and caused some mayhem. In that brief moment in time he shot down four of the Hellcats and forced the rest to break off the contact. Impressive in the right hands but as mentioned, there were never enough of these fighters and never would be as USAAF B-29’s pounded aircraft and engine factories.

Other variants were built in prototype form only or just on the drawing board and never went into regular production. They included the N1K3-J with engine changes and 2 x 13.2mm machine guns in the cowling (2 prototypes built), the carrier based version N1K3-A (2 prototypes) and N1K4-A (1 prototype), an uprated 2,000 hp Homare 23 engine in the N1K4-J (2 prototypes) and the proposed high altitude N1K5-J interceptor which did not get to prototype stage.

I am yet to see the Japanese based example (hopefully one day) but I have seen this mighty fighter at the National Museum of the United States Air Force in Dayton, Ohio (2009), the Smithsonian National Air & Space Museum – Steven F. Udvar-Hazy Centre in Chantilly, Virginia (2010 and 2013) and finally at the National Naval Aviation Museum in Pensacola, Florida (2011). All excellent aviation museums with incredible aircraft collections!

The surviving Japanese example is said to be from the famous 343rd Kokutai (Naval Air Group). Following combat damage, this Japanese surviving aircraft was forced to land on to the sea on July 24th, 1945 – the pilot was lost at sea and remains unknown but the aircraft was discovered on November 18th, 1978 in the Jyoen Hisayoshi Bay and later recovered. Today it is partially restored and on public display much as it looked when recovered but obviously the deterioration from the salt water has been treated to preserve the aircraft.

Back in 2009 the lighting of the cavernous halls of the USAF museum was very low. I am not sure what it is like these days but regardless the place is packed full of treasures and their Kawanishi N1K2-Ja Shiden Kai is no exception. This example was a fighter-bomber variant and had wing mounts for 4 x 250 kg (551 lb) bombs. It is painted in the livery and markings of the evaluation and test unit Yokosuka Kokutai who entered into air combat over Japan in the Spring of 1945.

Apparently this aircraft was kept outdoors for years in San Diego and used as a children’s playground (not uncommon for this to happen to old aircraft unfortunately)! It obviously suffered from deterioration over the years but was luckily donated to the museum in 1959 and put into safe storage. Restored over an eight year period it was put on display in October 2008 (not long before I went to the museum in the Summer of 2009!) – due to the long period of deterioration many parts had to be reverse engineered in the restoration process and apparently parts were used from four different aircraft (3 were wrecks recovered for examination) but the predominate airframe used was Serial Number 5312.

The Smithsonian Kawanishi N1K2-Ja Shiden Kai fighter (Serial Number 5341, tail number A343-35) was located at Omura or the Oppama Naval Air Station in Japan in 1945. Once shipped back to the United States it was evaluated most likely at the Naval Aircraft Factory in Philadelphia before being taken to the Willow Grove Naval Air Station where it was kept on outdoor display with other Japanese and German aircraft captured for testing during World War Two. There is sat slowly deteriorating away until it was acquired by the Smithsonian for preservation in 1983. It was loaned to the Champlin Fighter Museum in Arizona in December 1991, so that they could restore the aircraft (apparently part of this deal is they could display it at the museum for a while once finished). The restoration was completed in November 1994 and today it is painted in the markings and colours of the Imperial Japanese Navy 343rd Kokutai.

The Kawanishi N1K2-Ja Shiden Kai fighter (Serial Number 5128, tail number A343-19) at the National Naval Aviation Museum in Pensacola, Florida is a survivor of the elite Imperial Japanese Navy 343rd Kokutai. Apparently an unknown Japanese pilot inscribed a Haiku on the fuselage but that was something I missed back in 2011! This aircraft also features noticeable underwing bomb mounts. Apart from this info I cannot tell you much more about it! 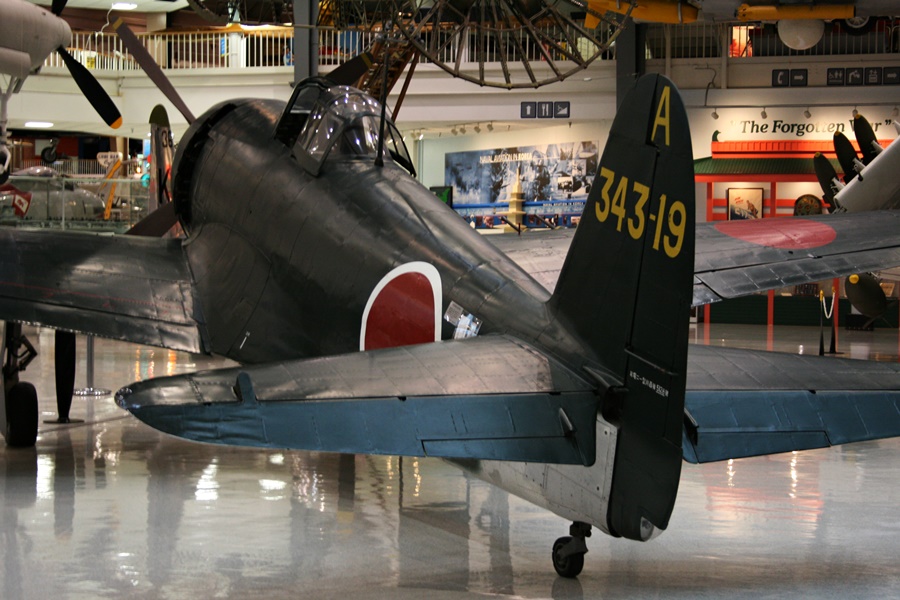 This site uses Akismet to reduce spam. Learn how your comment data is processed.

Where Are You From?

The A-12 Avenger II “Flying Dorito” Has Wings Again!

My travels and experiences living in the USA: Deano In America

Stellar Sea Lions – The Big Dogs of the Sea